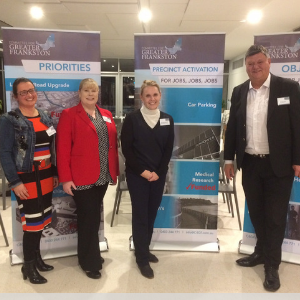 The Committee for Greater Frankston hosted Peta Murphy, our new Dunkley MP and her partner Rod Glover for after work drinks at McClelland Gallery.

Committee chair, Fred Harrison introduce Peta to our membership and congratulated her on a very successful election campaign. 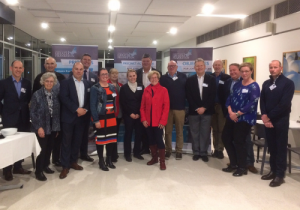 Peta is the first women to hold the seat of Dunkley. (Named for Louisa Margaret Dunkley a feminist who founded the Victorian Women’s Post and Telegraph Association in 1900 and campaigned for equal pay for women).

Peta has been a strong champion of expanding local job and educational opportunities in the Frankston community. Key electoral projects that she championed included the Frankston Health research hub and the Frankston rail extension past our health and education precinct. She also brings a bold vision for a future Australia that includes a new republic, sustainable energy, action on climate change and a fairer society that gives every Australian an opportunity to succeed.

We wish Peta all the best as the new member for Dunkley.

Our Committee was also pleased to be unveiling our new look “precinct activation” banner that checks-off the “health research” objective, having secured a $32 million in the Federal grant for the Frankston Health Futures hub in conjunction with Monash University and Peninsula Health. 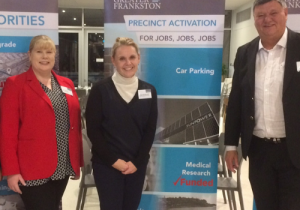 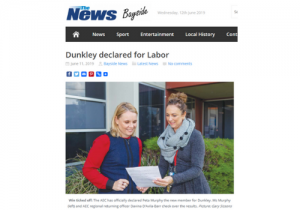 THE Australian Electoral Commission officially named Peta Murphy as the new member for Dunkley on 4 June. Ms Murphy was officially declared a member of the Australian Parliament at midday, ending the single term of outgoing MP Chris Crewther. Ms Murphy thanked the AEC and her supporters on social media.
“Thank you to the AEC, who make sure that the best system of democracy in the world works smoothly. The final result was 52.6 per cent to 47.4 per cent, with a margin of just over 5000 votes. This means we achieved a swing to Labor well in excess of the impact of the redistribution, with an average swing of 3.7 per cent across all booths,” she said. “To all of the volunteers, community groups and supporters who contributed to this result, thank you. I will work hard everyday, at home and in Canberra, for you and every local who lives in our wonderful electorate.”
Ms Murphy takes over from Liberal Chris Crewther, who was elected member for Dunkley in 2016. He visited the AEC’s Carrum Downs office to congratulate Ms Murphy on her win. Ms Murphy will move into Mr Crewther’s old office on Playne Street.