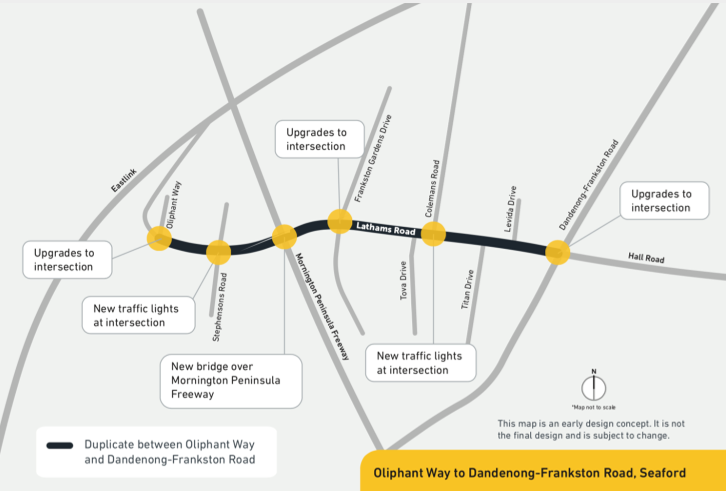 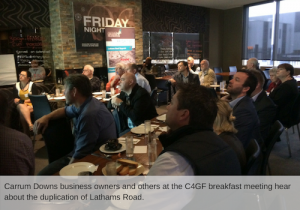 Many eyes on Lathams Road design
CARRUM Downs Industrial Estate business owners put forward their ideas for the Lathams Road duplication project at a breakfast meeting with members of the government’s Major Road Projects Authority (MRPA) on Thursday 18 October.  The meeting was hosted by the Committee for Greater Frankston at Shanika’s Café in Carrum Downs.

Lathams Road is one of seven projects under the South Eastern Roads Upgrade banner announced by the state government in its May Budget. Other projects are at Langwarrin South/Baxter (upgrading Golf Links and Grant roads), Cranbourne, Pakenham South and Dandenong South. MRPA project manager Austin Manning outlined the $80 million plus project to an attentive audience with the assistance of engineer Joel Docker and communications manager Jacinta Moylan.

Lathams Road will be duplicated (four lanes) between Frankston–Dandenong Road and Oliphant Way, a distance of 2.5 kilometres. The work will include a second bridge over Peninsula Link parallel to the existing bridge, creating two lanes in each direction; a two-lane Frankston Gardens Drive roundabout;  traffic lights where Lathams Road intersects with Stephenson Road  and Colemans Road; and two lanes each way on and off EastLink tollway (Rutherford Road).

Mr Manning said Lathams Road and the six other projects would be constructed as “availability public private partnerships [PPP] projects”. (PPP is a partnership between a government agency and a private sector company.)  Contracts for Lathams Road would be signed by the end of 2019, construction would start in 2020 and be completed by 2023. The PPP contract, where the road builder is paid for construction as well as maintenance, would be over 20 years.

Elements of the project discussed included removal of street parking on Rutherford Road, the shared walking–cycling path that will connect to Peninsula Link trail, the creation of a major intersection at Lathams Road/Hall Road and Frankston–Dandenong Road, position of bus stops, and size of the Rutherford Road roundabout (yes, it will be big enough for B-doubles and semis).

Two design aspects of concern to many were no right turn into Levida Drive and no ramps on to Frankston Freeway. Mr Manning said the design team was “looking closely at Levida Drive” but ramps were not part of the project’s scope.

Two lanes of Lathams Road will remain open during duplication works. There will be lights for pedestrians at the two new signalised intersections and median strip refuge islands elsewhere on Lathams Road.

Online consultation closes on 28 October. Committee for Greater Frankston is urging people to provide feedback on the proposed design at: your.roadprojects.vic.gov.au.

Read more about the impact Latham Road congestion has on the Carrum Downs industrial precinct in the 2017 Business Interviews dossier. 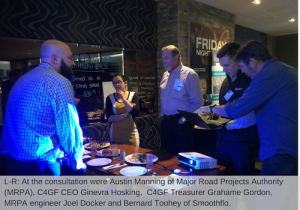 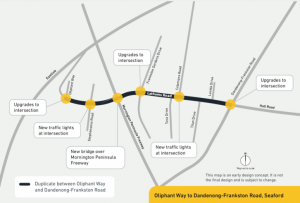 The Committee for Greater Frankston has been asked to kick-off community consultation for the duplication of Lathams Road in Seaford/Carrum Downs (this project was fully funded in May 2018).

Proposed designs have been released and your committee is organising a breakfast meeting in October to look at the designs and provide feedback.  Watch this space and more details will be available soon.

Alternatively, C4GF members can provide feedback directly to the Major Roads Authority through an online survey.