As the pre music festival kick-off the Ginevra Hosking of the Committee for Greater Frankston was proud to join Frankston High School student Zoe Cox and environmentalist David Cross on the Frankston Music Festival’s community panel to discuss the “Vision for Frankston in 2030.” This conversation was hosted by one pf Frankston newest residents- the internationally esteemed Rev Tim Costello, and responded to by Dunkley’s nominated Federal election candidates: Chris Crewther MP (LIB), Peta Murphy (ALP) and Spencer Porter (IND).

To book your tickets to other exciting Frankston Music Festival events visit their website. 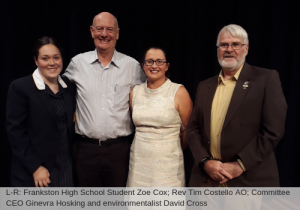 Pre- Festival event details
As a prelude to the forum the very talented Erica Bramham, Nathan Liow and Adam Speigl entertained with the fabulous “Music of Joni Mitchell- Both Sides Now.“

New Frankston Resident Rev. Tim Costello, shares some stories from his most interesting experiences as head of World Vision Australia. He will also conduct a chair side interview (Michael Parkinson style) with a panel of local luminaries to learn about his new home town – getting to the very heart of Frankston – what we value – what makes us tick.   Chris Crewther MP, Peta Murphy and Spencer Porter will be there. It will be a fabulous afternoon – certainly not to be missed by all residents interested in our Community and candidates seeking to represent them in the Federal Election.

Rev Tim Costello is one of Australia’s most respected community leaders and a sought after voice on social justice issues, leadership and ethics. For 13 years until October 2016, Tim was Chief Executive of World Vision Australia (WVA). In his current role as WVA’s Chief Advocate, Tim continues to place the challenges of global poverty on the national agenda. Tim is a founding board member and spokesperson for the Alliance for Gambling Reform.
In 2006 Tim was named Victoria’s Australian of the Year, in June 2005 was made an Officer of the Order of Australia (AO); in 2004, was named Victorian of the Year; and in 1997 was named as one of Australia’s 100 National Living Treasures