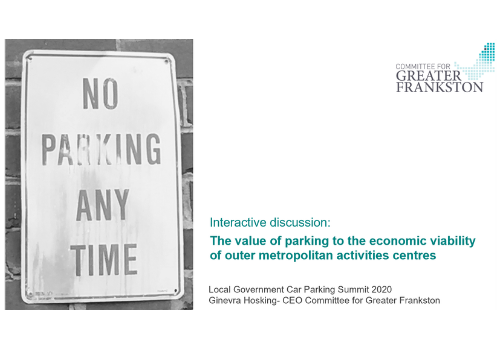 FRANKSTON’S car parking woes and how to fix them took centre stage at a national parking summit in Sydney in early November.
The bayside municipality was the “outer suburban” case study at a roundtable on the first afternoon of the 2019 Local Government Parking Summit, held at Manly.
Committee for Greater Frankston CEO Ginevra Hosking outlined the city’s problems – an inadequate localised public transport network, lack of affordable parking, and traffic congestion in Frankston’s city centre, which had the triple role of major economic activity centre, government services hub and regional rail and bus interchange.

Summit participants, including international parking technology experts, then debated possible solutions.
Ms Hosking cautioned delegates that adequate access to affordable car parking was a key element in a healthy outer suburban economy.
She raised eyebrows among delegates after challenging city-centric professionals who considered $13 a day to be cheap parking: “This is almost 10% of a minimum wage earner’s daily income. Unaffordable parking is a barrier to work.”
Ms Hosking’s presentation drew praise from outer suburban local government area delegates including Penrith, Gosford and Gold Coast, cities that are experiencing similar problems, when she challenged the modern planning philosophy of reducing car parking.
She said until outer metropolitan activity centres had adequate public transport, they would need “more parking to remain economically viable, not less”.
“It’s correct that backing ‘cars and parking’ within 15km of capital cities is a poor transport choice but outer suburbs do not have the same world-class public transport options. In Frankston’s case, we have a frequent train service to Melbourne but that’s it.
“In inner city areas, walking, cycling and public transport cover more than 90 per cent of residents’ needs. But 40km from the city, it’s a 40-minute wait or worse for a bus to the next suburb.”
She said a commuter park and ride area at Langwarrin on the proposed Frankston rail extension – which has been part-funded by the federal Coalition government but not yet by the state Labor government – could be bought for as little as $48 per square metre, far less than the $2000 plus per square metre needed for Frankston CBD land.
“The assertion that new train station parking is too expensive falls away when you can get land for 1200 car parks for under $2 million.”
Ms Hosking outlined Frankston’s historic parking problems, which started in the 1970s. (In 1975, for example, the Liberal state government promised to redevelop Frankston and Box Hill stations – elevated tracks, buses underneath, plenty of parking, pedestrian malls – but only Box Hill, which was thriving, went ahead.)
The current economic stagnation of Frankston’s city centre was “directly linked to inadequate local public transport and decades of failed car parking policy including abandoning a developer parking levy and privatising council’s public parking areas”. In central Frankston, one in four office buildings was now vacant, and one in five shopfronts was empty.
She listed solutions including well-managed developer contribution schemes to fund new parking, exponentially more public transport including ‘value capture’ mechanisms, centrally controlled car parking, and simplified pricing policy.
New car parks needed to be designed to better suit humans, and why they were coming to the city centre, not just cars alone. “Better understanding the types of people using car parks, how they use them and what’s affordable – this should inform car parking policy; next should come design and technology.”
She said an emphasis on smart parking technologies such as number plate recognition, location apps, dynamic signage and in-ground sensors would be misplaced “without first fixing the underlying policy”.
“We must acknowledge that Frankston with its triple roles will never have enough parking to keep everyone happy but parking policy must provide affordable parking for people who need to come to our city centre for work, health, study or leisure while encouraging the most efficient parking behaviour. And it must be as simple as possible to use.
“Reforming car parking policy is always difficult, with resistance expected from some sections of the community, but in Frankston there is a collective understanding that ‘things just have to change’ and this is being driven by the community, not imposed from the top.”
Delegates were impressed that Frankston Council had successfully formed a car parking working group to bring together council officers, Committee for Greater Frankston members, and representatives of Frankston Traders’ Association, Peninsula Health, Chisholm TAFE, Monash University, Peninsula Aquatic Recreation Centre, individual businesses, service clubs, traders and sports clubs. The focus is on the city’s future car parking needs. (The next in a series of meetings is on 21 November.)
“We are discussing how to take advantage of the present and coming major investments in Frankston – rail extension, TAFE expansion, Monash University growth, hospital expansion, rail commuter car parks – to transition from an entirely car-dependent economy to one with an integrated transport solution. It will not be easy or painless but is essential for Frankston’s city centre to prosper.” 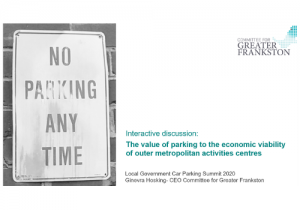