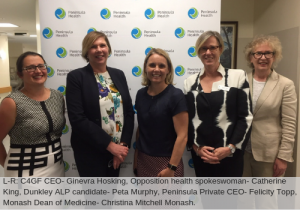 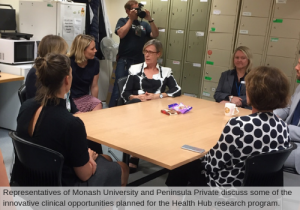 GREATER Frankston’s year has started with a bang following a federal Labor Opposition election pledge to fund new health approaches for elderly people in the region.

Labor says if it wins government this year it will contribute $21 million to a $48 million ‘Health Futures Hub’ in Frankston that will research how to keep older people at home and out of aged care centres as well as avoid unnecessary hospitalisation. The hub will service Frankston and the Mornington Peninsula, which have a large population of people aged over 60 (almost 32 per cent compared to greater Melbourne’s 19 per cent).

Monash University and Peninsula Health have been developing the project for about 10 months. People of all ages with mental health and substance addiction issues also will benefit from other innovative trials conducted by the hub.
The Opposition’s health spokeswoman Catherine King made the pledge on Wednesday 16 January when visiting Frankston Hospital with Dunkley ALP candidate Peta Murphy.
Peninsula Health chief executive Felicity Topp said it was “fabulous news for the region”. The Frankston trials will investigate new ways of introducing 24/7 monitoring and more rehabilitation services in the home and community for the elderly.

Ms King said it was hoped the health research hub would develop successful models “that can be scaled up and rolled out across the Australia”. “The hub will focus on designing and delivering new, better-integrated models of care for some of the region’s most vulnerable people,” she said. “The project will bring together researchers, clinicians, health system leaders, consumers and students to generate transformative solutions to” the problems of aged care as well as mental health and addiction.

Ms King said a federal Labor government would support phases one and two of the project, “which will involve the establishment of new research centres and a Health Data Platform in the Frankston Health and Education Precinct. It will also see the expansion of the Academic Centre at Frankston Hospital, creating construction jobs and boosting the local economy”. She said Labor was “reviewing a proposal for phase three of the project”, which would see a health professions education and research facility built in about five years.

Ms King said the region was “ideally suited to hosting the hub, given its unique tight-knit community, demographic make-up, established use of digital medical records, existing relationship between Monash University and Peninsula Health, and strong network of local volunteers”. The project would provide more jobs for the region in both health and construction.
“Improved mental health outcomes and reduced substance abuse will help to keep local families safe,” Ms King said.

Committee for Greater Frankston chair Fred Harrison said the hub would be a key driver of “Frankston’s vision for a vibrant healthcare, medical research and education precinct to train the next generation of doctors, nurses and allied health professionals”. “This is great news; a mighty effort from Dunkley candidate Peta Murphy to advocate for this project and the professional jobs it will bring, which are so badly needed in our region,” he said.

Committee chief executive Ginevra Hosking said the hub would enable Frankston to become a world-leading centre of excellence in the management of ageing and chronic disease. “The nature of health and medicine is changing rapidly. Australia needs to develop the capacity to quickly implement the latest treatment innovations for chronic conditions, which cannot always be provided by traditional hospital systems. The project will bring new skills and professional career opportunities to our region, providing exciting new jobs.”

Ms Hosking said health and education precincts “generate job growth 2.5 times the national average”. “Our region will be the first in Australia to adopt new and exciting best practice approaches to the treatment of elderly people.” She said trials would show how best to, for example, treat people who had mild dementia or those who had started to fall at home. “It’s not just a matter of putting people into aged care,” she said. “Improving health outcomes for people with complex and challenging conditions can best be done by testing new evidence-based models of care.” 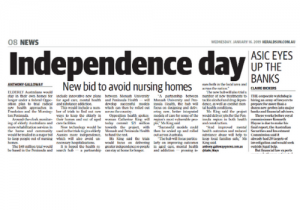 Elderly Australians would stay in their own homes for longer under a federal Opposition plan to trial radical new health approaches in Frankston and the Mornington Peninsula.
Around-the-clock monitoring of elderly Australians and more rehabilitation services in the home and community would be trialled in a major bid to keep people out of nursing homes.
The $48 million trial would be based in the Peninsula and include innovative new plans for aged care, mental health and substance addiction.

This would include a number of trials to find out new ways to keep the elderly in their homes and out of aged care facilities.
New technology would be used in the trials to give elderly Aussies more independence, which will also avoid unnecessary hospitalisations.
It is hoped the health research hub — a partnership between Monash University and Peninsula Health — will develop successful models which can then be rolled out across the country.

Opposition health spokeswoman Catherine King has promised funding for the research hub. Picture: AAP
Opposition health spokeswoman Catherine King will today commit $21 million ­towards the project, with ­Monash and Peninsula Health to fund the rest.
Ms King said the trials would focus on delivering greater independence so ­people can stay at home for longer.
“A partnership between Monash University and Peninsula Health, the hub will focus on designing and delivering new, better integrated models of care for some of the region’s most vulnerable people,” Ms King said.
“Successful models could then be scaled up and rolled out across Australia.
“The hub will focus particularly on improving outcomes in aged care, mental health and addiction — pressing issues both in the local area and across the nation.”
The new hub will also trial a number of new treatments to tackle alcohol and drug dependence, as well as combat mental health conditions.
Ms King said the project would deliver jobs for the Peninsula region in both health and construction.
“And improved mental health outcomes and reduced substance abuse will help to keep local families safe,” Ms King said.