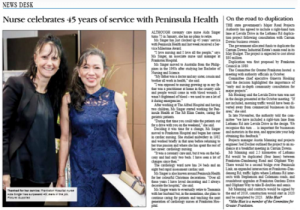 The government allocated funds to duplicate the Carrum Downs Industrial Estate’s main road in its May Budget. The project is expected to cost about $80 million.
Duplication was first proposed by Frankston Council in 1989.
The Committee for Greater Frankston hosted a meeting with authority officials in October.
Committee chief executive Ginevra Hosking said the decision highlighted the importance of “early and in-depth community consultation for major projects”.
Ms Hosking said the Levida Drive turn was not in the design presented at the October meeting. “If not included, morning traffic would have been diverted away from commercial businesses in this area,” she said.

In late November, the authority told the committee “we have included a right-turn lane from Lathams Rd into Levida Drive in the design. We recognise this turn … is important for businesses and motorists in the area, and appreciate your help obtaining this feedback.”
Projects manager Austin Manning and projects engineer Joel Docker outlined the project to an audience at a breakfast meeting in Carrum Downs.
Mr Manning said 2.5 kilometres of Lathams Rd would be duplicated (four lanes) between Frankston–Dandenong Road and Oliphant Way. There would be a second bridge over Peninsula Link; an expanded intersection at Frankston–Dandenong Rd; traffic lights where Lathams Rd intersects with Stephenson and Colemans roads; and roundabout upgrades at Frankston Gardens Drive and Oliphant Way to take B-doubles and semis.

Mr Manning said contracts would be signed by the end of 2019, construction would start in 2020 and be completed by 2023.

*Mike Hast is a member of the Committee for Greater Frankston.
First published in the Chelsea Mordialloc Mentone News – 19 December 2018 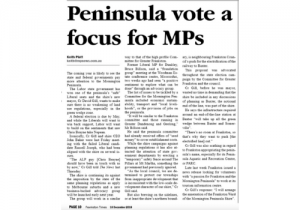 The coming year is likely to see the state and federal governments pay more attention to the Mornington Peninsula.
The Labor state government has won one of the peninsula’s “safe” Liberal seats and the shire’s new mayor, Cr David Gill, wants to make sure there is no weakening of land use regulations, especially in the green wedge zone.
A federal election is due by May, and while the Liberals will want to win back support, Labor will want to build on the sentiments that saw Chris Brayne take Nepean.
Ironically, Cr Gill and shire CEO John Baker were last Friday meeting with the failed Liberal candidate Russell Joseph, who had been aligned with the shire on several issues.
“The ALP guy [Chris Brayne] should have been in touch with us by now,” Cr Gill told The News last Thursday.
The shire is continuing its against the imposition by the state of the same planning regulations as apply to Melbourne suburbs and a new business-backed advocacy group will be launched early next year.
The group will work in a similar way to that of the high profile Committee for Greater Frankston.
Former Liberal MP for Dunkley, Bruce Billson, said a “foundation group” meeting at the Woodman Estate conference centre, Moorooduc, two weeks ago had seen “a positive sentiment to explore what can be done” through an advocacy group.
The list of issues to be tackled by a Committee for the Mornington Peninsula included economic sustainability, transport and “local livelihoods”, or the provision of jobs on the peninsula.
“It will be similar to the Frankston committee and those running in Greater Dandenong and Geelong,” Mr Billson said.
He said the peninsula committee had already received offers of “seed money” to cover establishment costs.
While the shire campaigns against planning regulations it has also attracted the attention of state government departments by erecting a “temporary” safety fence around The Pillars at Mt Martha, something the government had previously ignored.
“As the local council, we are determined to protect our townships from inappropriate development that is inconsistent with the low-scale development character of our shire,” Cr Gill said.
But also brewing on the sidelines, or at least the shire’s northern boundary, is neighbouring Frankston Council’s push for the electrification of the railway to Baxter.
This proposal was advocated throughout the state election campaign by the Committee for Greater Frankston and the council.
Cr Gill, before he was mayor, wasted no time in demanding that the shire be included in any discussions of planning as Baxter, the notional end of the line, was part of the shire.
He says the infrastructure required around an end-of-the-line station at Baxter “will take up all the green wedge between Baxter and Somerville”.
“There’s no room at Frankston, so that’s why they want to push [the electrified line] out.”
Cr Gill was also scathing in regard to Frankston appropriating the peninsula’s name, especially for its Peninsula Aquatic and Recreation Centre, or PARC.
Late last week Frankston issued a news release looking for volunteers with “a passion for Frankston and the Mornington Peninsula” to work at its tourism information centre.
Cr Gill’s response: “I will arrange the annexation of the Frankston Ward of the Mornington Peninsula Shire”.
First published in the Frankston Times – 17 December 2018 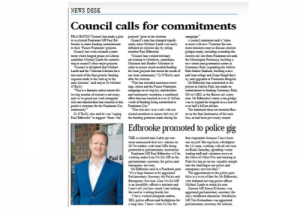 FRANKSTON Council has made a plea to re-elected Frankston MP Paul Edbrooke to make funding commitments to their ‘Future Frankston’ projects.

Council last week released a statement which heaped praise on Liberal candidate Michael Lamb for committing to council’s four major projects. “Council is delighted that Michael Lamb and the Victorian Liberals have met each of the four priority funding requests made in the lead up to the state election,” said mayor Cr Michael O’Reilly. “This is a fantastic achievement following months of extensive advocacy and we’re proud our work alongside relevant stakeholders has resulted in this positive outcome for the Frankston City community.” Cr O’Reilly also said he was “urging Paul Edbrooke” to support “these vital projects” prior to the election. Council’s tone has changed significantly since Michael Lamb was easily defeated on election day by sitting member Paul Edbrooke.

“Council has worked tirelessly advocating to Members, candidates, Ministers and Shadow Ministers in order to secure much-needed funding for local projects that meets the needs of our local community,” Cr O’Reilly said after the election. “This has included numerous meetings, letters and the Future Frankston campaign involving key stakeholders and community members, a combined effort that has resulted in over $1 billion worth of funding being committed to Frankston City.” “Our role now is to work with our elected members to ensure delivery of the funding promises made during the campaign.

A council statement said it “aims to meet with new Victorian Government ministers soon to discuss election pledges made, including extending the electric rail line from Frankston towards the Mornington Peninsula, building a new tennis and gymnastics centre at Centenary Park, expanding the Jubilee Park Indoor Stadium, building a new safe boat refuge and Coast Guard facility, and upgrades to Frankston Hospital Mr Edbrooke has committed to the project at Jubilee Park, but made no commitment to funding Centenary Park, Oliver’s Hill, or the Baxter rail extension. Mr Edbrooke’s main event pledge was to expand the hospital at a a cost of over half a billion dollars. The statement does not mention Baxter as the final destination of the train line, as had been previously touted.
First published in the Chelsea Mordialloc Mentone News – 5 December 2018