Front page coverage: Time to get on board 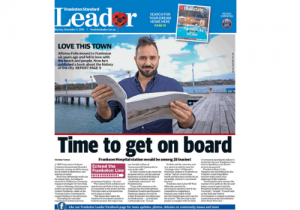 A NEW train station between Frankston Hospital and Monash’s Peninsula campus would be among the 25 busiest in Melbourne, new data has revealed.  More than 5000 people would use the station daily, according to research by Melbourne University transport strategist Dr Chris Hale.

Ginevra Hosking, chief executive of advocacy group Committee for Greater Frankston, called on the Victorian Labor Government to commit funding to the rail project.
“Extending the train line requires both federal and state government funding,” she said. “The Liberal Party at federal and state levels and Federal Labor have all committed to the project, but the Victorian Labor government has yet to jump on board.  “This means that unless the Andrews Government commits to build the project, this region may lose the $225 million of Commonwealth funding that is now on the table.”

Dr Hale’s research also found the proposed station, and the planned duplication and electrification of the rail line to Baxter, would “profoundly rejuvenate” the Frankston line.
“If one of the stations on the extended line was built between Frankston Hospital and Monash’s Peninsula campus, it would be within 50 minutes’ travelling time for 83,000 people — up from just 14,000 people now,” he said.  Dr Hale said the extension and new station would increase the “strategic value” of Monash’s Peninsula campus at Frankston as well as “deliver a world-class health and education precinct in an accessible, attractive, convenient location”.

Frankston state Labor MP Paul Edbrooke restated the government’s position that it was committed to completing a business case, which would provide detailed plans and costs for the project. “The first step in this project is complete with the State Government spending $1 million to modernise the new Frankston train station signalling so the Baxter project can proceed.”

Frankston Mayor Colin Hampton said electrifying the line to Baxter would bring Metro services within reach of an additional 30,000 residents.
“It will significantly increase the number of car parks on the line and better connect major hubs like Frankston Hospital and Monash University,” he said. “Council calls on the State and Federal Governments to commit to starting construction on the electrification of the Stony Point line.” 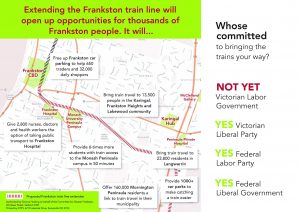 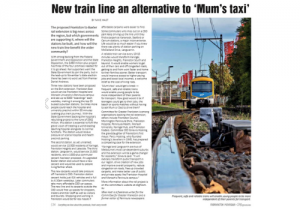 The proposed Frankston to Baxter rail extension is big news across the region, but which governments are supporting it, where will the stations be built, and how will the new train line benefit the wider community? With strong backing of federal government (Liberal), Victorian opposition (Liberal) and federal opposition (Labor), the $450 million plus project has three of four promises needed for it to go ahead. Rail supporters want the Victorian Labor government to join the party. In the lead-up to November’s state election, the Andrews government has made all sorts of road and rail promises but no word yet on Frankston to Baxter rail.

Three new stations have been proposed on the eight-kilometre extension.

“Frankston East” would service Frankston Hospital and Monash University’s Peninsula campus, and see up to 5000 “boardings” each weekday. The station would be in the top 25 of busiest suburban stations. Six times more people could reach the hospital and university precinct within 50 minutes (walking plus train journey).  With the state government backing the hospital’s rebuilding project (to the tune of $562 million), this station is essential to fulfil the grand vision of creating a world-leading teaching hospital alongside its normal functions. The station would relieve pressure on scarce hospital and health precinct parking. The second station (unnamed to date) would service 13,500 residents of Karingal, Frankston Heights and Lakeside.
The third station, Langwarrin, would service 23,800 residents, and a 1000-plus commuter car park has been proposed. An upgraded Baxter station also would have a new carpark. It would be used by people living further afield (such as the Mornington Peninsula, population 155,000).

Other rail extension benefits include:

The new carparks would take pressure off Frankston’s CBD. Frankston station carpark holds just 416 vehicles and is full by 6.30am weekdays. Later commuters take many affordable CBD car spaces. The new line and its carparks outside the CBD would free-up spaces for shoppers, traders and their staff as well as visitors and tourists. Shopping and working in Frankston would be far less hassle if affordable carparks were easier to find. Some commuters who miss out on a CBD park keep driving up the line until they find a carpark at Kananook, Seaford or Carrum stations, a major inconvenience. Life would be so much easier if you knew there was plenty of station parking on McClelland Drive, Langwarrin.

A reliable train service (every 10-15 minutes) would transform Karingal, Frankston Heights, Frankston South and beyond. It would enable workers to get out of their cars and off congested roads – getting to and from work faster and home to their families sooner. Better transport would improve access to higher paying jobs and boost local incomes, a welcome relief as the cost of living rises.

“Mum’s taxi” would get a break – frequent, safe and reliable local trains would enable young people to be more independent of their parents for transport. How good would it be if teenagers could get to their jobs, the beach or sports matches without having to ask mum (or dad) to drive them?

Committee for Greater Frankston is among organisations backing the rail extension (they include Frankston Council, Mornington Peninsula Shire, Frankston Hospital, Peninsula Health, Monash University, Karingal Hub, and Frankston traders). Committee CEO Ginevra Hosking (granddaughter of Frankston’s first mayor Percy Hosking who founded Hosking’s Jewellers in 1945) has prepared a compelling case for the extension.  “Karingal and Langwarrin are two of Melbourne’s most car-dependent suburbs and the extension will be a game-changer for residents,” she said. “It will radically transform public transport in our region, drive creation of new jobs and improve overall prosperity, reduce congestion on roads, free-up crowded carparks, and make better use of public and private assets like Frankston Hospital and Monash’s Peninsula campus.”

More information about the rail project is on the committee’s website: www.c4gf.com.au