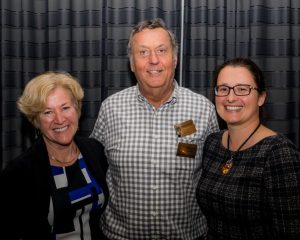 OLDER residents of Frankston Heights were enthusiastic about the proposed Frankston train line extension when presented with its benefits at a Frankston Heights Probus Club meeting on Tuesday 16 October.  More than 100 members and guests packed Frankston RSL’s main function room to hear about the project from Committee for Greater Frankston’s vice-president Christine Richards and chief executive Ginevra Hosking.

The suburbs of Frankston Heights and Karingal will be the key beneficiaries of the Frankston train line extension. These suburbs have a combined population of more than 13,000 on either side of Beach Street and Cranbourne Road.  The area is bounded by the golf clubs to the north, Peninsula Link freeway in the east, Robinsons Road and Golf Links Road in the south, and Moorooduc Highway in the west.

The Probus event was just the latest of several “roadshows” about the rail extension as the committee garners broad-based support for the $450 million plus project, which has the backing of the federal government (Liberal), Victorian opposition (Liberal) and federal opposition (Labor), three of four promises needed for it to go ahead.  The Victorian Labor Government has not yet committed to the project.

Rail extension supporters – which include Frankston Council, Mornington Peninsula Shire, Frankston Hospital, Peninsula Health, Monash University, Karingal Hub, and Frankston traders – now want the Victorian Labor government to commit to the project.  Ginevra Hosking said the Probus audience “enthusiastically engaged in a question and answer session and was supportive of the benefits of the rail extension”.

Three new stations are being considered for the eight-kilometre extension – one at Frankston East to service Frankston Hospital and Monash University’s Peninsula campus, a second that would service Frankston Heights and neighbouring Karingal, and a third at Langwarrin.

Probus members were especially keen to hear about the station at Frankston Hospital. Several said that having an alternative to paying parking fees at the hospital by catching a train would be of great benefit for those visiting sick relatives and friends. (Parking costs $7 for the first hour and $11 for three hours. Concession card-holders pay half this but have to front up to the hospital’s cashier at main reception.)

The audience also was pleased to hear about the Andrews state government’s expansion plans for Frankston Hospital, which include an integrated cancer ward and day clinic to treat people who currently make often arduous journeys to Melbourne hospitals. The 11-storey tower expansion is part of a grand vision for a Frankston medical research, education and health precinct being led by Peninsula Health/Frankston Hospital, Chisholm TAFE and Monash University’s Peninsula campus.

Many in the audience gave support to what is being widely seen as a game-changer for employment and education opportunities in our region. “Frankston Biomedical Precinct” will be a place that provides effective patient care, trains the next generation of healthcare professionals, and is home to cutting-edge medical research and development.  An extended Frankston train line was viewed as a wise and insightful strategy to address the practicalities of access and future car parking demand in this precinct.

Chris and Ginevra fielded questions about how the rail extension would make public transport a key part of Frankston’s growth and development. One audience member commented: “This is really about making the train line relevant to Frankston’s future.”

The consensus in the room was clear- with half the funding secured and an election in 40 days, this is our once-in-a-lifetime opportunity to transform our suburb and to leave a legacy to our children.