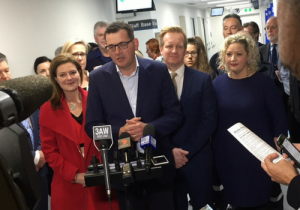 A RE-ELECTED Andrews Labor government will spend $562 million to build 11-storey twin towers to redevelop Frankston Hospital.  The announcement was made at the hospital by Premier Daniel Andrews and state health minister Jill Hennessy on Monday morning.  The hospital redevelopment promise is another tick on the Committee for Greater Frankston’s priority list. It follows the state government’s commitment to duplicate Lathams Road in Carrum Downs Industrial Estate (which will occur no matter who wins government in November) and promises to extend the Frankston rail line that have been made by the state and federal Coalition as well as federal Labor.

The hospital redevelopment will start in 2020 and be completed by 2024. It will include 120 additional beds, two new operating theatres, maternity ward, obstetrics ward, women’s clinic, children’s ward and special care nursery.  Two floors will accommodate mental health services. An integrated cancer ward and day clinic will treat people who currently have to travel to Melbourne hospitals.

Mr Andrews said the project would create up to 1700 jobs during construction. “This will be the biggest upgrade to an outer suburban hospital in the state’s history,” he said.
“It will deliver a massive expansion of child and maternal health services to meet growing demand as more young families move to Melbourne’s southeastern suburbs.”
He said more people were choosing to make Frankston home and the region was experiencing a baby boom. By 2032, there would be about 3000 babies a year born at the hospital.
Ms Hennessy said the expansion would cater to an expected extra 10,000 patients a year.

Frankston MP Paul Edbrooke said the project would “create good, secure jobs for people in Frankston and give local families world-class healthcare close to home”. Carrum MP Sonya Kilkenny said more people were “choosing to make Carrum and Frankston home, so we’re giving them the peace of mind that a first-rate hospital is on their doorstep when they need it”.

Committee for Greater Frankston chief executive Ginevra Hosking said the redevelopment was a key element of the health and education precinct being created by Peninsula Health, Frankston Hospital and Monash University’s Peninsula campus.
“The hospital redevelopment will be a vital investment for both the healthcare of the community as well as future economic prosperity and job growth in the Greater Frankston region,” she said. 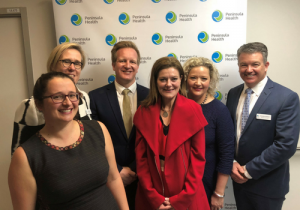 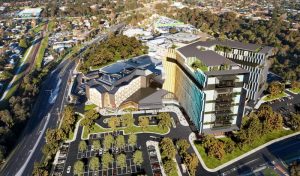 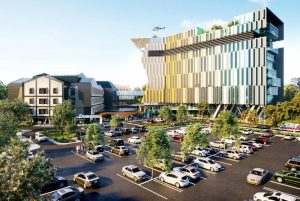 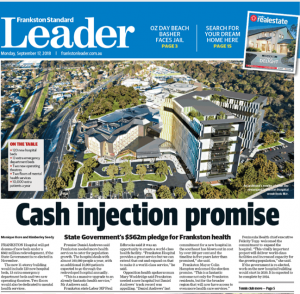 FRANKSTON Hospital will get dozens of new beds under a $562 million redevelopment, if the State Government is re-elected in November.
The new 11-storey building would include 120 new hospital beds, 13 extra emergency department beds and two new operating theatres. Two floors would also be dedicated to mental health services.
Premier Daniel Andrews said Frankston needed more health services to cater for population growth. The hospital deals with almost 100,000 people a year, with an additional 10,000 patients expected to go through the redeveloped hospital annually.
“This is a massive upgrade to an already fantastic health service,” Mr Andrews said.
Frankston state Labor MP Paul Edbrooke said it was an opportunity to create a world-class health facility. “Frankston Hospital provides a great service but we can extend that out and expand on that to make it a world-class service,” he said.
Opposition health spokeswoman Mary Wooldridge said Frankston needed a new hospital but Daniel Andrews’ track record was appalling. “Daniel Andrews’ last commitment for a new hospital in the southeast has blown out in cost by over 250 per cent and the timeline is five years later than promised,” she said.
Frankston Mayor Colin Hampton welcomed the election promise. “This is a fantastic outcome not only for Frankston residents, but for the broader region that will now have access to even more health care services.”
Peninsula Health chief executive Felicity Topp welcomed the commitment to expand the hospital. “This vitally important project will deliver world-class facilities and increased capacity for the growing population,” she said.
If the government is re-elected, work on the new hospital building would start in 2020. It is expected to be complete by 2024.

Labor and the opposition both went to Frankston on Monday, wooing voters in the state’s second most marginal seat with competing promises on health and law and order.
The Andrews government promised to spend $562 million on a major upgrade to Frankston Hospital if it is re-elected on November 24.
Labor says it will transform the 77-year-old hospital into an 11-storey facility with 120 new ward beds, two new operating theatres and 13 new emergency beds.

Mr Andrews said it was the biggest upgrade to an outer suburban hospital in Victoria’s history.
“The community across this region deserve nothing less,” Mr Andrews said.
“There’s a lot of people who talk about growth – we get on and get things done and cater for that growth.”
The government estimates there will be 3000 births a year at the expanded hospital by 2032, an increase of more than 1100 per cent on the 235 babies delivered in 2015-16.

Work is due to start in 2020 and be finished in 2024.
But shadow health minister Mary Wooldridge said Labor could not be trusted to deliver the hospital on time or on budget given its recent track record with the Monash Heart Hospital, where costs grew from an initial $150 million taxpayer outlay to $396 million.
“Frankston needs a new hospital but Daniel Andrews’ track record is appalling,” Ms Wooldridge said.
“Daniel Andrews’ last commitment for a new hospital in the south-east has blown out in cost by over 250 per cent and the time line is five years later than promised.”
Opposition Leader Matthew Guy was also campaigning in Frankston on Monday, promising to recruit 100 extra protective services officers to patrol 20 Melbourne railway stations in daylight hours if the Coalition wins the November 24 election.

The Opposition promised to spend $57 million over four years to employ 100 extra PSOs and deploy them at “high crime spots” on the metropolitan network.

Mr Guy announced Frankston and Mordialloc stations on the Frankston line would be the first stations to see PSOs working on platforms between 10am and 6pm.
“We will have the single biggest expansion of our PSO system since they were introduced,” Mr Guy said.
“I want to see our railway stations become safer spaces but not just from 6pm to the last train, but all day.”

Michael Lamb, the Liberal candidate for Frankston and a former police station commander, said it was “very clear to see that the train system is used by the criminal element during the day”, including ice-addicted people behaving erratically.
The former Baillieu Coalition government introduced PSOs to Melbourne stations between 6pm and the last service.
The Andrews government completed their rollout to every station on the network.
Police Minister Lisa Neville said Mr Guy’s claim that the promise represented the biggest boost to PSOs since they were introduced was wrong.
One hundred and nine PSOs were recruited in 2016 to cover all-night services on weekends and $62.3 million was committed last year for 100 new mobile PSOs.

“These claims show yet again, you can’t trust a word the Liberals say on law and order,” Ms Neville said.
Last month it was agreed that PSOs would also patrol trains, as well as stations, after a deal was struck with the Rail, Tram and Bus Union, which represents authorised officers.
Labor holds the state seat of Frankston by a margin of just 0.5 per cent. 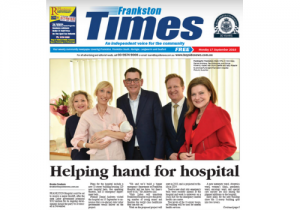 FRANKSTON Hospital could be set to receive a major facelift, after the state Labor government promised $562 million in funding to its redevelopment should the party be re-elected in November.
Plans for the redevelopment of the hospital include the construction of a new 11 storey tall building, which will home 120 new hospital beds, two new operating theatres, and an additional 13 new emergency department beds.
Premier Daniel Andrews visited the hospital on 10 September to announce that a re-elected state Labor government would deliver on the project.
“We said we’d build a bigger emergency department at Frankston Hospital and we have, but there’s more to do,” Mr Andrews said.
“Only Labor will transform Frankston Hospital to give the growing number of young mums and families the world class healthcare they can rely on.”
Carrum MP Sonya Kilkenny said that “more families are choosing to make Carrum and Frankston home, so we’re giving them the peace of mind that a first rate hospital is on their doorstep when they need it.”
Work on the proposed project will commence in 2020, and is projected to finish in 2024.
12 new short stay emergency beds were recently opened at the hospital, and work is currently underway on the already funded crisis hub for emergency mental health care centre.
Two levels of the 11 storey hospital redevelopment are planned to be devoted entirely to mental health services.
A new maternity ward, obstetrics ward, women’s clinic, paediatric ward, oncology ward, and special care nursery are also among the planned additions to the hospital.