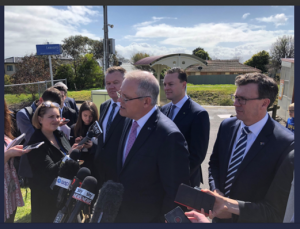 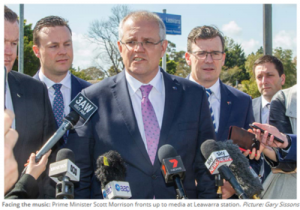 AUSTRALIA’S new Prime Minister Scott Morrison has made first visit to Frankston as leader, visiting Leawarra station to reaffirm the federal government’s $228 million commitment to electrifying the Frankston train line to Baxter.  Dunkley MP Chris Crewther, Minister for Cities, Urban Infrastructure and Population Alan Tudge MP, and Victorian leader of the opposition Matthew Guy MP were among the many faces on hand to support the statement.
“This is a project which we announced in the budget, this is a commitment that is fair-dinkum. I’m really pleased to hear about the commitment from Matthew Guy and his team to make sure that this congestion busting infrastructure can be put in place here from Frankston to Baxter,” Mr Morrison said.  “I’ll be very pleased to work with a state government that wants to get on and get things done. The Frankston-Baxter line we are 100 percent committed too.

The money is in the budget which I handed down for both of these projects, and we’re keen to get on with it. “We’re here at the Frankston corridor, and that corridor has a lot of challenges to it. This infrastructure solution is a key part of meeting that challenge. It’s great to be here to reaffirm the commitments that I have made in the budget as treasurer, which I confirm today as Prime Minister.” Chris Crewther MP confirmed plans that stations at Frankston East and Langwarrin would be built as part of the $453 million project.

The project is currently reliant on both committed funds from the federal government and pledged funds by the state Liberals. The Prime Minister confirmed that if a Liberal government were elected in November’s state election, the project would be on track for completion in 2023.  Matthew Guy MP confirmed a state Liberal contribution of $225 million to the project should they win the election, and the Prime Minister called on the state Labor government to match the investment. “I don’t think there is a back up plan to the Labor party not spending money. If the Labor party want to commit to this project I welcome it, and if they don’t, you’ve got a Liberal opposition who is going to invest in it. I’d encourage people to take that option,” Mr Morrison said. “Right now I’d like to see them commit $225 million to the Frankston-Baxter line. That’s what I’d like to see them do.”

The Times reported on 6 August that the state Labor party was conducting a $3 million business case study to assess the feasibility of the project before committing any funds (“Labor comes to Baxter line party”, The Times 6/8/18).  Requests for an update on this process were not answered before publication deadline.

Scott Morrison chose the back streets of outer suburban Frankston as the place for his first appearance in front of the Melbourne media as prime minister on Friday, his backdrop a primitive railway platform on the Stony Point line.  The rows of single storey homes, each with their own driveway, surrounding Leawarra station were an apt setting for a new leader who is viewed as more suburban than his urbanist predecessor Malcolm Turnbull, who was suspiciously fond of Melbourne’s trams.  But as any urbanist will tell you, the price to be paid for living in a low-rise suburb in a big city is heavy traffic at the end of your street.

So Mr Morrison took the opportunity to assure nervous Victorian voters that even though Turnbull had flown to New York (how urbanist is that?), there would be no going back on the federal government’s recent epiphany about Melbourne’s congestion issues and the federal cash required to deal with them. The phrase “congestion busting” sprang from the prime minister’s mouth at least half a dozen times as he spoke about the twin pressures of Melbourne’s worsening traffic and runaway population growth.  He named Victorian Liberal MP Alan Tudge his captain’s pick as “minister for congestion busting” because he lives in Melbourne.  “Alan Tudge has a much longer title but what he’s known to me as is the minister for congestion busting and that includes dealing with the challenges of population growth, which I know is a big challenge in Melbourne,” he said.

“And I wanted a pair of Melbourne eyes on congestion-busting projects across the country, particularly here in Melbourne.”

There was no new congestion-busting project to spruik today, just a reaffirmation of existing ones, including $5 billion for Melbourne Airport rail.  With Opposition Leader Matthew Guy at his left shoulder, he also reaffirmed the $225 million commitment to electrify the Frankston railway line to Baxter, which has been matched by the Victorian Coalition, but not yet the Andrews government.

Mr Morrison goaded Victorian Labor to match him dollar for dollar on those two projects. “So there’s two easy runs on the board for the state government to stump up and show they’re really keen to work with us on those issues,” he said.

But the PM hinted at the possibility of other future congestion-busting announcements in days to come, revealing that he had been in Pakenham that morning with Liberal MP Jason Wood, “looking at that Pakenham corridor, which is another big challenge for Melbourne”.  Mr Wood holds the federal seat of Latrobe by a small margin, but his fellow Victorian Liberal backbencher Chris Crewther, who hosted Mr Morrison in Frankston on Friday, holds Dunkley by an even smaller one.  Those are big challenges for the Coalition.

Those MPs can both expect to see plenty more of their new PM between now and the next election, endeavouring to bust congestion and save the suburban furniture.