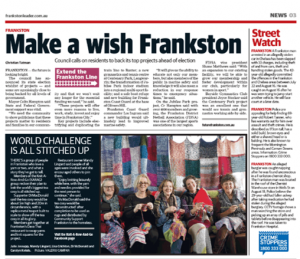 FRANKSTON — the future is looking bright.
The council has announced its state election wishlist of projects — and some are agonisingly close to being backed by all levels of government.
Mayor Colin Hampton said State and Federal Government support was vital. “We need the community to show politicians that these projects matter to residents and families in our community and that we won’t wait any longer for the essential funding we need,” he said. “These projects will offer even more reasons to live, work, study, invest and enjoy time in Frankston City.”
Key projects include electrifying and duplicating the train line to Baxter; a new gymnastics and tennis centre at Centenary Park, Langwarrin; the transformation of Jubilee Park indoor stadium into a regional multi-sport facility; and a safe boat refuge and new building for Frankston Coast Guard at the base of Olivers Hill.
Frankston Coast Guard commander Les Ingram said a new building would ultimately lead to improved marine safety.
“It will give us the ability to educate not only our members, but also members of the public in marine safety and knowledge it will also mean a reduction in our response times to emergency situations,” he said.
On the Jubilee Park project, Cr Hampton said with over 4000 members and growing, the Frankston District Netball Association (FDNA) was one of the largest sports associations in our region.
FDNA vice president Shane Matthews said: “With an expansion to our existing facility, we will be able to grow our membership and foster development within our club, particularly for women in sport.”
Bayside Gymnastics Club president Joyce Stocker said the Centenary Park project was an excellent one that would see tennis and gymnastics working side-by-side.
futurefrankston.com.au 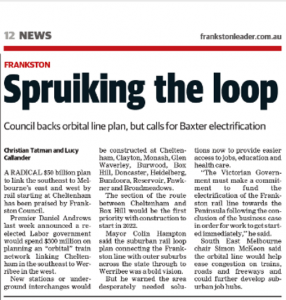 A RADICAL $50 billion plan to link the southeast to Melbourne’s east and west by rail starting at Cheltenham has been praised by Frankston Council.
Premier Daniel Andrews last week announced a reelected Labor government would spend $300 million on planning an “orbital” train network linking Cheltenham in the southeast to Werribee in the west.
New stations or underground interchanges would be constructed at Cheltenham, Clayton, Monash, Glen Waverley, Burwood, Box Hill, Doncaster, Heidelberg, Bundoora, Reservoir, Fawkner and Broadmeadows.
The section of the route between Cheltenham and Box Hill would be the first priority with construction to start in 2022.
Mayor Colin Hampton said the suburban rail loop plan connecting the Frankston line with outer suburbs across the state through to Werribee was a bold vision.  But he warned the area desperately needed solutions now to provide easier access to jobs, education and health care. “The Victorian Government must make a commitment to fund the electrification of the Frankston rail line towards the Peninsula following the conclusion of the business case in order for work to get started immediately,” he said.
South East Melbourne chair Simon McKeon said the orbital line would help ease congestion on trains, roads and freeways and could further develop suburban job hubs. 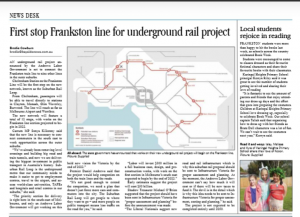