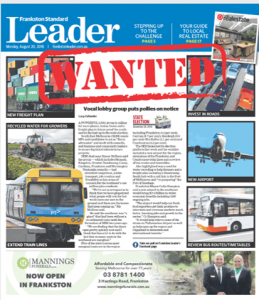 A POWERFUL southeastern suburbs lobby group is calling on politicians to deliver more planes, trains, buses and a freight plan, which they say are needed to future-proof the region. South East Melbourne (SEM) is demanding MPs and candidates to act as “fierce advocates” for the region and work with councils, business and community leaders to secure big ticket infrastructure projects.
SEM chairman Simon McKeon said the group — which includes Monash, Kingston, Greater Dandenong, Casey, Cardinia, Frankston and Mornington Peninsula councils — had identified congestion, public transport, job creation and liveability as key areas of concern for the south east’s one million plus residents. “We’re not so arrogant as to think that we have pinpointed what people will vote for but we do have our ears to the ground and these are the issues that keep coming up,” Mr McKeon said.

What’s your top election priority for the southeast?

He said the southeast was “a giant” that had been without a co-ordinated voice until the formation of SEM about two years ago. “We are finding that the doors open pretty quickly now and I think that has a lot to do with the fact that so many seats in the southeast are marginal.”
Five of the seven most marginal seats are in the region including Frankston (0.5 per cent), Carrum (0.7 per cent), Bentleigh (0.8 per cent) Mordialloc (2.1 per cent) and Cranbourne (2.3 per cent).
The SEM launched its election platform on Wednesday (August 15).
The wishlist included a new airport for the region, extensions of the Frankston and Cranbourne train lines and a review of bus routes and timetables. Also highlighted was a need for water recycling and a freight plan including a Dandenong South hub with a rail link to the Port of Melbourne and “re-purposing” the Port of Hastings. “We need to work together to create the well-paid and secure jobs of the future so residents have access to great jobs near where they live,” Mr McKeon said. Details: southeastmelbourne.org
TOO DEPENDENT ON CARS
Kingston Mayor Steve Staikos said car dependency in the region was “unsustainably high” and “driving down productivity and reducing liveability”. An extension of the Frankston and Cranbourne lines would dramatically reduce congestion and give Kingston residents quicker access to jobs and education at Frankston Hospital and Monash University’s Peninsula Campus.
BETTER WATER INFRASTRUCTURE NEEDED
Greater Dandenong Mayor Youhorn Chea said the region’s food and fibre industries — which employed 7000 people — were increasingly dependent on efficient water use and alternative water sources. Cr Chea called for a business case for the Pakeham water recycling project and funding to support stage one of the Somerville Tyabb project to bring recycled water to growers in the south east. “While these projects will benefit food and fibre producers … (they) will help feed people right across the region as well as right across Victoria,” he said.
DAILY COMMUTE A ‘NIGHTMARE’ FROM MORNINGTON
Mornington Peninsula Shire Mayor Bryan Payne said the daily commute was a nightmare for the 470,000 people working in the region.
“It is increasingly clear that investment in local roads hasn’t kept up with demand,” Cr Payne said. He said while the State Government had announced a south east roads package in the 2018 budget, several vital roads were left out including Thompsons, Westall and Glasscocks roads. “Even though those roads directly benefit locals in Cranbourne, Clayton, Greater Dandenong and Casey they are of regional significance, including to my own shire of Mornington Peninsula at one end of the region right up to Monash at the other end.”

NEW AIRPORT NEEDED
Frankston Mayor Colin Hampton said a new airport in the south east would bring $17.6 billion in wider economic benefits including 3160 ongoing jobs. “The airport would help our fresh food exporters get their produce to interstate and overseas markets much faster, boosting jobs and growth in the sector,” Cr Hampton said. “It would help relieve some of the strain on Tullamarine airport as well as help open up the region and Gippsland to interstate and international tourists.
URGENT REVIEW OF BUS ROUTES
Monash Mayor Paul Klisaris said SEM was calling for a review of bus routes and frequency across the south east as a “congestion busting” solution. “We have major employment centres that are ill-served by our current bus routes and timetables,” Cr Klisaris said. “We need to ensure that buses in the region go where people need them to go at a time that people need to get there.”

FREIGHT PLAN FOR CARDINIA
Cardinia Shire Mayor Collin Ross said south east Melbourne was one of the most important manufacturing regions in Australia with jobs in the sector than Western Sydney and Adelaide. “Getting goods in and out of South East Melbourne is becoming increasingly difficult and more expensive and this will continue unless something is done,” Cr Ross said. “We are calling on governments to help create a comprehensive freight plan for South East Melbourne, including a plan for the Port of Hastings.” SEM also wants a $15 million connecting rail spur to the South East Freight Hub site so that freight can be moved by rail to and from the Port of Melbourne.

EXTENDING rail services in the southeast is the number one priority for voters.
An exclusive Leader poll has revealed that 43 per cent of those taking part in an online survey ranked the need to extend the Frankston and Cranbourne train lines at the top of their election wishlist.
Of the 365 people who took the poll, 157 felt the train line extensions were the most important infrastructure projects for the region.
Better roads (25 per cent, 92 votes) and a new airport (16 per cent, 57 votes) were ranked second and third prospectively in terms of importance.

The poll was prompted by a powerful southeastern suburbs lobby group calling on MPs and candidates to advocate for the region.  South East Melbourne (SEM) identified congestion, public transport, job creation and liveability as key areas of concern for the south east’s one million plus residents. The SEM wishlist included a new airport for the region, extensions of the Frankston and Cranbourne train lines and a review of bus routes and timetables.

Online readers from as far away as Geelong weighed into the debate with ambitious transport infrastructure the hottest topic. Charles called for a Cranbourne and Frankston rail loop to extend both lines and connect them to a new airport near Tooradin.
“They are going to electrify Frankston the Baxter and extend to Cranbourne East, so go all out and set up our infrastructure for the next 200 years,” he posted.  SEM comprises Monash, Kingston, Greater Dandenong, Casey, Cardinia, Frankston and Mornington Peninsula councils, community and business leaders.