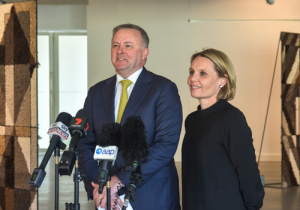 The federal Opposition’s spokesman for infrastructure, transport, cities and regional development Anthony Albanese and Labor’s candidate for Dunkley, Peta Murphy, at a media “doorstop” about federal Labor support for the Rail extension inside McClelland Gallery before the Committee for Greater Frankston lunch.

A FEDERAL Labor government will build the Frankston rail extension, infrastructure spokesman Anthony Albanese said on Tuesday 31 July.  Mr Albanese – the federal Opposition’s spokesman for infrastructure, transport, cities and regional development – was speaking at a “City Partnerships” roundtable organised by the Committee for Greater Frankston when he made the announcement.

The promise is the third of four needed if the project is guaranteed to go ahead with the Liberal–National federal government in May allocating $225 million for the extension. This was matched by the Victorian Liberal–National Opposition on 17 July when Opposition leader Matthew Guy said he would build the rail extension if his party formed government in November.
The Andrews Labor state government is yet to announce its intentions but is preparing a business case for the project, paid for by the federal government and due to be released next year.

Committee for Greater Frankston chief executive Ginevra Hosking said if the state government commits to the project, it would go ahead no matter who wins government in Victoria later this year or forms the next Australian government after the federal election, which must occur before the end of 2019.
“This bipartisan federal support is fantastic news for the Greater Frankston region,” she said. “Crucial public transport infrastructure investments shouldn’t be left to political chance.”  Ms Hosking said Labor’s Dunkley candidate Peta Murphy had “worked tirelessly to secure her party’s federal commitment to make this project happen as quickly as possible”.

Mr Albanese said a Labor government would build the rail extension earlier than had been promised by the federal Coalition government.  “In 2013 the incoming Coalition government cancelled all federal investment in public transport projects … not already under construction because it does not understand the daily needs of Australians,” he said.
“[Federal] Liberals have now put $225 million on the table for the [rail] project, but none of that money is available in 2018–19 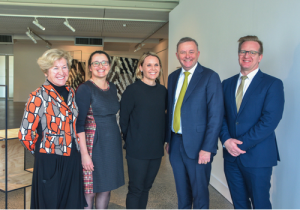 Turning to Labor’s recently announced City Partnerships policy, Mr Albanese said Labor was “committed to unlocking the potential of our cities [including outer suburbs like Frankston] by bringing together all levels of government, the private sector and community … to achieve genuine structural change”.  He said projects like the Frankston rail extension “function as a catalyst for greater economic growth”.  “Importantly, it will be policy driven from the bottom up through organisations such as yours [the Committee for Greater Frankston].”

Mr Albanese said cities such as Frankston needed investment “to secure their productivity, sustainability and liveability, to ensure they continue to be places of opportunity for all people”.  “If people can’t access employment, training or educational opportunities, if people are stuck in their cars for hours commuting to and from work, and if people cannot afford a roof over their heads, then they can’t achieve their potential.” 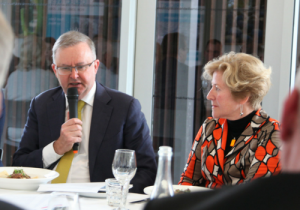 He said Frankston was a perfect example of an urban area that would benefit from government investment in a new train line. “And what I know from my conversations with Peta Murphy [Labor’s candidate for Dunkley] over recent years and with you – councils, the Committee for Greater Frankston, local businesses and community members – is that you already have a fair idea of what you’d like to see happen in this area. “In Frankston, genuine collaboration between many of the stakeholders is already in place.” Mr Albanese said the Andrews state government’s “significant investment in infrastructure projects” such as level crossing removals, Frankston station redevelopment, and Chisholm TAFE was “having a transformative impact on the Frankston region”. “But you need a federal government that listens and provides the necessary investment to underpin your vision for this diverse and vibrant region.”

“I want to congratulate the Committee for Greater Frankston, [state MP] Paul Edbrooke, Frankston and Mornington Peninsula Shire councils, and local businesses for the work they do in engaging the community and developing a true vision for this region.”

You can read more about the Committee for Greater Frankston’s strategic vision in the presentation provided to Anthony Albanese.