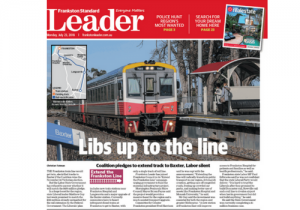 THE Frankston train line would get twin, electrified tracks to Baxter if the Coalition wins the November 24 Victorian election. But the Labor State Government has refused to answer whether it will match the $450 million Liberal pledge.
In a huge boost for the region, state Liberal leader Matthew Guy last week promised to match the $225 million already earmarked for the rail extension by the Federal Government.  The Liberals’ plan includes new train stations near Frankston Hospital and Langwarrin and a major upgrade of the Baxter station. Currently commuters have to board infrequent diesel trains at Frankston to get to Baxter, with only a single track of rail line.

Frankston Leader has joined Frankston Council in its ‘Extend the Frankston Line’ campaign urging government to fund the essential infrastructure project.  Mornington Peninsula Shire Council mayor Bryan Payne said the project would provide a massive boost for the region and a much-needed upgrade to public transport.  Committee for Greater Frankston president Fred Harrison said he was rapt with the announcement.  “Extending the line will radically transform public transport in our region, driving job creation, getting cars off congested roads, freeing up crowded car parks, and making better use of public and private assets like Frankston Hospital and Monash University,” he said.

Mr Guy said the investment was essential for both the region and greater Melbourne.  “We need to ensure Melbourne has a 21st century rail network that connects suburbs,” he said. “We need to get Victoria moving.  “A new station at Frankston East will improve access to Frankston Hospital for patients and families as well as health professionals. “It will also and help students get to the local campus of Monash University.”

Frankston state Labor MP Paul Edbrooke said he was not confident that the state Liberal Party would deliver.  “It is hard to trust the Liberals after they promised to build Doncaster rail, Rowville rail and a rail line to Avalon airport when last in government but did not build anything,” he said.  “And now they are promising to build another project without knowing the actual cost.
“That is why the State Government is currently completing the business case and $1 million has been spent ensuring the new Frankston station is ready for Baxter electrification.” 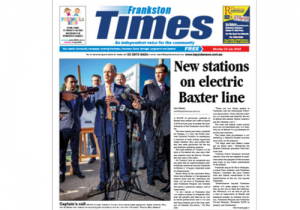 A GANG of politicians gathered at Baxter train station last week to spruik a $450 million plan to extend the electrification of the Frankston line to Baxter.
The train station provided a platform on Tuesday (17 July) for Prime Minister Malcolm Turnbull to accompany a coalition of state Liberal opposition leader Matthew Guy and Liberal federal and state politicians for the big pre-elections spending promise.  The state election in Victoria will be held in November this year and a federal election must be held by November next year at the latest.
Mr Turnbull told an assembled media pack that an eight-kilometre electrification extension beyond Frankston to Baxter is “a hugely important piece of infrastructure”.
Diesel trains on the unreliable Stony Point line to Baxter will be replaced by electric trains and new additional stations will be built in Frankston East, near Frankston Hospital and Monash University’s peninsula campus, and at Langwarrin.
“A new station at Frankston East will improve access to Frankston Hospital for patients and families as well as health professionals and it will also and help students get to the local campus of Monash University,” Mr Guy said. “There are two things people in Frankston and the Mornington Peninsula should know, firstly that the Liberals will duplicate and electrify the rail to Baxter and second, Daniel Andrews and Bill Shorten won’t.”

The state and federal Labor parties have not yet confirmed they will electrify rail to Baxter if in government after the next elections. The Labor state government is undertaking a federally-funded business case study on the proposal.  “We hope state and federal Labor get on board soon,” Committee for Greater Frankston president Fred Harrison said. Victorian Public Transport Minister Jacinta Allan did not respond to questions about the progress of the business case study or any Labor commitment to the project.

Frankston mayor Cr Colin Hampton, a Labor Party member, said Frankston Council welcomes the joint Liberal state and federal commitment to the electrification of the rail line beyond Frankston. “Electrification beyond Frankston station will mean people living further up the line or from the Mornington Peninsula will be able to get on a train at Langwarrin or Baxter and commute directly to Monash University, Frankston Hospital and Frankston Private Hospital, Chisholm TAFE or directly into Melbourne.”

Mornington Peninsula Shire mayor Cr Bryan Payne, a Liberal Party member, welcomed a pledge by the Liberals made on the day the Baxter line project was announced to commit $2.5 million each year to run more Route 788 bus services between Portsea and Frankston. “Currently the Route 788 bus carries over half a million passengers annually with current frequencies from 45 minutes to 100 minutes,” Cr Payne said.

Federal Dunkley Liberal MP Chris Crewther, whose ultra-marginal electorate will lose the northern part of Baxter to neighbouring Flinders at the next federal election, was one of several Liberal politicians to head to Baxter last Tuesday. Mr Hunt, the federal Flinders MP, was in Mayo in South Australia on 17 July on the by-election campaign trail for Liberal candidate Georgina Downer, announcing more than $1.1 million as federal Health Minister to help people with mental illnesses in regional and rural areas across South Australia.

Back in Baxter the Prime Minister was quizzed about his comments earlier on the Tuesday when interviewed by radio station 3AW when he said “Sudanese gangs in Melbourne is an issue”.
Mr Turnbull said his government has “zero tolerance for racism” and told 3AW: “There is certainly concern about street crime in Melbourne. There is real concern about Sudanese gangs.”

And was rewritten under the headline “Liberals’ electric plan ends at Baxter” for the Western Port News, 24 July 2018