Federal Budget – and the winner is: Frankston! 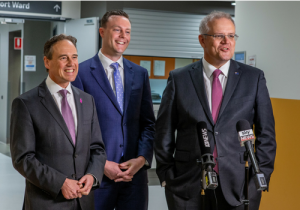 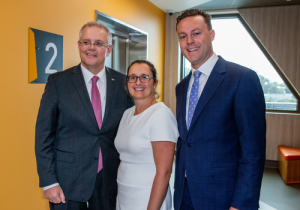 FEDERAL Treasurer Scott Morrison confirmed funding of $225 million to extend the metropolitan electrified train line from Frankston to Baxter during his Budget speech on Tuesday night 8 May.  Mr Morrison’s speech was broadcast live on ABC TV and radio. It was the first time in living memory “Frankston” had been mentioned by a federal Treasurer during his Budget presentation.
Mr Morrison was about halfway through his Budget speech when he introduced the government’s plans for infrastructure:
“Our $75 billion 10-year rolling infrastructure plan will continue – strengthening our economy, busting congestion in our cities, making rural roads safer and getting our products to market,” he said.
“Tulla Airport Rail. Western Sydney Airport rail. Brisbane Metro. Perth Metronet. The M1 upgrade on the Gold Coast.
“At a more local level. The Shoalhaven Bridge. Avalon Airport. New works on the Geelong line and an electrification upgrade for the Frankston to Baxter rail line.”
(Technically speaking, the project is to extend and duplicate the electrified network beyond where it ends at Frankston to Baxter, about 8 kilometres.)
Fred Harrison, president of advocacy group Committee for Greater Frankston, was one local listening to the Treasurer. He emailed committee board members next morning: “What wonderful news in the Budget last night. I saw it live and almost fell off my chair when the Treasurer specifically mentioned the Frankston to Baxter train line. A mighty effort from [Dunkley MP] Chris Crewther to help get this up. We’re not there yet but a fantastic starting point. Now we need the state government to match the amount.”
The committee was set up 16 months ago and one of its key priorities was the rail extension. Earlier in the year, the committee asked the two governments to commit to the project by pledging an initial amount of $200 million each until the business case was completed, expected early next year.
Committee for Greater Frankston CEO Ginevra Hosking said the $225 million in federal money “is the first serious commitment to a vital regional project”. Ms Hosking acknowledged the role of federal MP Chris Crewther: “Mr Crewther secured $3 million of federal money for a business case, which the state government is undertaking, and now money in the Budget towards its construction. It’s a great result.”
In a statement, Mr Crewther, who was elected to federal Parliament at the July 2016 general election and replaced the retiring Bruce Billson, who was Dunkley MP for almost 20 years, said he had been advocating for the rail project “before my election to Parliament”.
“The … $225 million [will] get works underway on electrification and duplication … which is crucial for our local area.” He said the project would reduce commuting times for “many residents in Frankston City and the Mornington Peninsula”.
“I call on the Andrews Labor Government to match our $225 million with Victorian state funding of at least the same amount,” Mr Crewther stated.
“This will mean a train station right on [people’s] doorsteps, park and ride closer to your home, freeing up parking around Frankston, Kananook, Seaford and Frankston Hospital, [train] stabling at Baxter, connectivity, jobs and more.”
Ms Hosking said “the great news is the rail extension has supporters on both sides of politics”.
In response to the federal Budget announcement, a spokesman for the state government told the committee: “We’ve campaigned hard for a fairer share for Victoria and it seems the campaign has worked.
“We welcome this [rail extension] funding and we will work in partnership with the Commonwealth Government to add these works to [the state government’s] massive road and rail agenda.
“Planning work is already underway on the electrification to Baxter, and we will work in partnership with the Commonwealth Government as to what’s next.”
The Committee for Greater Frankston is advocating for a new station to service Frankston Hospital and Monash University’s Peninsula campus as well as stations at Karingal and Langwarrin, two of Melbourne’s most car-dependent suburbs with a combined population of 37,000 people. The committee is also requesting a 1000-plus space commuter park and ride next to Langwarrin station.
Fred Harrison said a project many thought was a pipe dream had been brought into sharper focus by this Budget allocation. “The rail extension will radically transform public transport in our region, driving job creation, getting cars off congested roads, freeing up crowded car parks, improving prosperity, and making better use of public and private assets like Frankston Hospital and Monash University’s campus at Frankston.”