Recent media coverage of the Frankston Traders campaign to take action on city car parking by extending the train line to Langwarrin.

Time to act on parking

COMMITTEE for Greater Frankston has called on local and state governments to take urgent action to increase the number of car parking spaces in the Frankston region.  The group has also asked the state government to recognise that more parking needs to be provided in outer suburban areas with less access to public transport than Melbourne’s inner suburbs.  Victoria’s planning scheme treats the car parking needs of outer areas like Frankston the same as inner suburbs.

The committee – formed last year to advocate for a better deal in the greater Frankston region – believes this approach is fundamentally flawed.  CEO Ginevra Hosking said inner suburbs were far better connected than outer suburbs. “If you live in Richmond, for example, you can catch trains, trams, buses or taxis. If you’re fit, you also can walk or ride a bicycle.  “But in outer areas with inadequate public transport, a car is essential for most individuals and families. Everything is more spread out. If you use public transport, it takes hours to get anywhere.”

Ms Hosking said the “one-area-fits-all planning scheme” was creating problems across the greater Frankston region. “For example, busy Mt Eliza village is now facing a five per cent reduction in parking spaces. Shoppers and traders will be horrified when they find out.”

The committee’s call coincides with a separate public campaign by Frankston traders requesting more parking in the bayside city’s centre.  From 6 April, traders will start distributing a pamphlet that explains the crippling impact on their businesses of inadequate accessible parking for their customers and staff. It asks the state government to “recognise the economic value of adequate car parking in outer suburbs”.

“Frankston people consistently say they won’t shop in Frankston unless they can drive in and quickly find car parking. At the moment they can’t,” the pamphlet states.  Traders are backing the campaign to extend the train line past Frankston to Frankston Hospital, Monash University, Karingal and Langwarrin, where a 1000-space commuter car park has been proposed on comparatively cheaper land. It would take pressure off the 416-space car park at Frankston station, which is full by 6.30am on weekdays. “If commuters can catch trains in their home suburbs, we free up vital Frankston CBD car parks for workers and shoppers,” the pamphlet states. “It’s time to act – extend the track.”  Traders are giving copies to customers and clients, encouraging them to contact their elected state MP, Paul Edbrooke, to discuss their car parking concerns and why the train line needs to be extended.

Lack of parking in Frankston has been brought into sharp relief this year with the just-started replacement of the train station.  The state government is spending $63 million on beautifying Young Street (completed earlier this year) and the new station, but has not included extra parking at the station. Many traders and residents have questioned the omission.
“There’s no point revitalising Frankston if people can’t get into it,” Ms Hosking said. “We have a good train service from Frankston to stations up the line and to Melbourne’s CBD that enables, for example, workers and students to access jobs and education. However, rail usage depends on people being able to access stations.

“World-leading public transport is our first choice but the Frankston and Mornington Peninsula region is at least a decade away from this standard. Until then Frankston developers must provide adequate parking in new buildings, the state government should provide more parking for rail commuters in the suburbs where people actually live, and Frankston Council should build enough affordable off-street parking for shoppers and workers.” 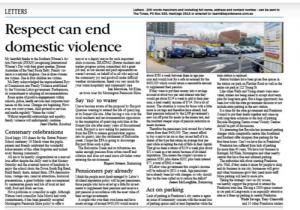 Time to act on parking

Lack of parking in Frankston’s city centre is again an issue of community concern/angst/torment with the recent loss of parking spaces until at least September while the train station is replaced. Station builders have been given free spaces in the station car park on Fletcher Rd as well as the entire car park at 122 Young St.

Like when Wells and Young streets were renovated, Traders are being asked to accept short-term pain for long-term gain. But a huge opportunity has been lost with the state government decision to not include extra parking in the new station.

It is time for the state government and Frankston Council to put their heads together and come up with long-term solutions to the lack of parking. Bayside shopping centre owner Vicinity Centres should be part of discussions.

It’s interesting that while Bayside is raising parking charges comparable centres like Southland and Eastland offer shoppers free parking for the first three hours. Can’t we have this in Frankston?

Frankston has suffered from lack of parking for more than 40 years. We have lost business to Karingal, Mt Eliza, Mornington and other nearby centres that have free and untimed parking. The authorities talk about creating Frankston jobs. Well, if they make it easier for people to shop and do business in our city, businesses will grow and when businesses grow they need more staff. More parking will lead to more jobs.

Taking the strategic view on city access, we heartily support the proposal to extend the Frankston train line. Having a 1000-space commuter car park at Langwarrin is especially attractive idea as it frees up parking in central Frankston.

– Wade Savage and 10 other Frankston traders