The case for extending the Frankston line rail 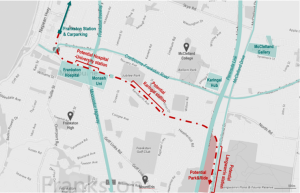 A key priority of the Committee for greater Frankston is the extension of the metropolitan railway line past Frankston, where it currently ends, to Langwarrin a distance of just five kilometres.

Duplication and electrification of this line would provide viable public transport links through all “sandbelt suburbs”.  Benefiting two of the region’s most car-dependent suburbs, Karingal and Langwarrin, by connecting 37,000 residents including 19,000 who commute to work.

The Frankston line is a significant public asset and extending it to Langwarrin would encourage people out of their cars and off the peak hour congested M1 (Monash Freeway). 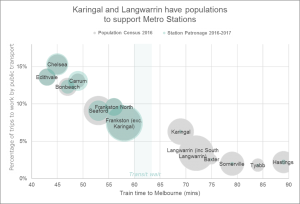 The Greater Frankston region has fewer than 28 local jobs per 100 residents. This means two things: 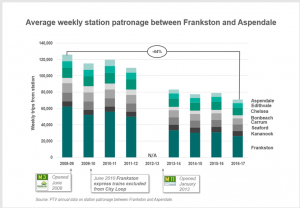 Rail patronage on the Frankston line has remained relatively constant since 2008. However, trips initiated from the sandbelt suburbs have almost halved.  This shift away from rail in the sandbelt suburbs can be linked to a relative decline in the quality of EXPRESS services.  Even where multi-billion dollar rail infrastructure exists, a neglected express service is detrimental to system usage, and consequently a community’s economic opportunities.

Issues on the Frankston line include:

Getting onto a train at Frankston is difficult because:

Much-needed Frankston line service improvements such as more trains more often, renovated stations and Protective Services Officers have not addressed comfort issues associated with a long train commute. The proposed reduction in seats – to a ratio of 10 seats to 90 standing – with the introduction of Metro Trains’ new rolling stock will be most detrimental to suburbs with longer commute times.

To create fast links to work for all Melburnians, the rail transport strategy needs to differentiate between:

Establishing a robust express service on the Frankston line requires:

Do the economics on empty car parks