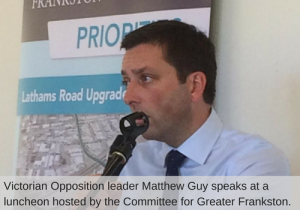 Mr Guy said it didn’t make sense for the rail line to effectively end at Frankston and the move would also free up land in the city’s commercial heart.  “That line does need to be expanded,” he told a luncheon hosted by the Committee for Greater Frankston at McClelland Gallery.

In a wide ranging speech, Mr Guy said the all eyes would be on the ultra marginal Frankston seat in the run up to the November 24 election.  He said his government would reboot the Port of Hastings Development Authority — disbanded by the Labor Government — as part of a plan to create jobs in the region.

Law and order will also be a focus. “The truth is crime has risen significantly in Victoria,” he said. “It’s about time we have a different way forward. More of the same is not good enough.”

A small group of unionists held a protest outside the venue during Mr Guy’s visit.  Unionists said Mr Guy’s party had a record of putting business interests ahead of ordinary people.  “Working people in Frankston care about protecting working conditions,” Victorian Trades Hall secretary Luke Hilakari said in a statement.

Frankston Council has long argued that electrification and duplication of the rail line will have massive benefits including the creation of more than 4000 jobs and freeing up land in central Frankston for employment uses.